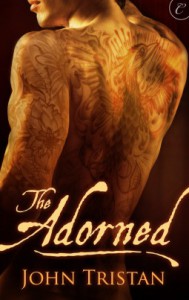 Just jotting down some thoughts: This book took me by surprise with how involved I got. Reminiscent to [b:Kushiel's Dart|153008|Kushiel's Dart (Phèdre's Trilogy, #1)|Jacqueline Carey|http://d202m5krfqbpi5.cloudfront.net/books/1328168291s/153008.jpg|2990010] in some ways, which is my all time favorite MF epic fantasy trilogy. I bought this book on a whim, the cover was eye-catching (sucker for tattoos) and I only briefly skimmed the blurb. But I thought $2.51 for a full length novel was a damn good bargain so I didn't see the harm in buying.

I have to say I really loved the concept in this story, a world where certain people are selected by highly valued tattoo artists to become their work of arts, becoming one of the "adorned" who nobles pay to put them on display at lavish parties. This book is all about Etan's journey, as he transforms from the suddenly orphaned and desperate 19 year old country boy he is at the beginning of the book. He is a vastly changed man at the end. A great part of this is due to the slow burning romance between him and his master Tallisk. The romance is not the main focus for half of the story and while I did root for them to be together, I wasn't totally sold on the fact that they were "in love". We don't really get to see them get to -know- each other, it seemed mostly like obsession with his artwork on Tallisk's part especially considering the fact that he fell in love with his last Adorned dude and gratitude and youthful infatuation on Etan's part. I also could have used a lot more explanation on the history of this world (the different races, why the last war happened, where the Blooded came from). BUT. I easily overlooked these factors because I was very much enjoying the rest of the story. And without giving away anything, by the end after what they each went through...I was rooting hard for both of them together. I got more than a little teary-eyed. So I became sold on their romance eventually.

A lot happens to Etan in one year so there is lots that helped keep my interest throughout, with the escalating tensions among the relationships and in the city as Etan navigates his way through the center of society he finds himself landing in, political schemes, the intricate tattoo descriptions, romance. Simply put, this book was a pleasure to read from start to finish and I was panicking when I was getting so close to the end. Recommended to go ahead and get this if you're curious and in the mood for light fantasy, plus it's definitely worth more than the price. :)