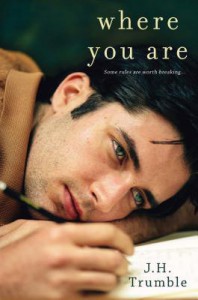 I'm still questioning my desire to give this 5 stars because I don't see myself willing to reread this. I'll leave it for now.

But this book had me riled up in so many different ways. Despite the fact that I ended the story not necessarily liking any of the characters, I was fully invested in the story and it brought out so much emotions in me-even if those emotions mostly fell on anger and frustration with the situations and the way the characters choose to deal with them. I felt intense empathy for Robert and his mom who have been saddled with the burden of his dying father (who has never been a good husband or father) for several years now and an overly intervening family. Their circumstances hit close to home for me and the resulting conflict takes over a good half of the book. I also just have to add that his aunts disgusted me. Let's not even mention Stephen. Selfish little prick.

I also felt intense frustration and dislike towards Andrew for much of the book regarding how he dealt with his ex-wife and Stephen, but once things inevitably blew up I started feeling just sorry for him. In the end, I was glad they both got the endings they both deserved even though I don't necessarily root for either of them as individual characters.

I realize this doesn't really feel like a really positive review even though I really did like the book lol and I'm glad I got to read this. I give credit to the author for tackling such a controversial topic and keeping things relatively realistic (only Robert's fan club and his relationship with Nic seemed OTT). I like the fact that the author didn't try to push any agenda on us on the ethics of relationships between students and teachers and I still reserve my own judgments, though this will definitely give you some new perspectives and considerations. Her other novel, [b:Don't Let Me Go|11718466|Don't Let Me Go|J.H. Trumble|http://d.gr-assets.com/books/1309475560s/11718466.jpg|16666561], completely failed for me (I went off on a mini rant on it) and even though I only found the character of Luke absolutely annoying then, I am interested from the little tidbits about he and Curtis so looking forward to their story.

Sooo....would I recommend this? If you're curious at all about the topic and how it can be handled (and overall, I was impressed on how it -was- handled), I would definitely recommend trying this.
Tweet
2488 BOOKS