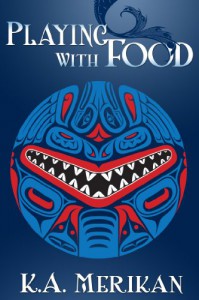 What, what, that was it?

This was such a strange and really short read.
I really liked it! Llawan is just one of many mermaids who have been captured and now live in a huge 'fish' tank inside a restaurant. One by one, they are caught, killed, and served as dinner! Llawan finally tires of delaying the inevitable and bravely ventures forth from hiding within his castle in the tank-becoming immediately captured by a tall and pale 'shark-man'. With 4 arms and very, very sharp teeth! xD To Llawan's surprise, Rhys doesn't want to eat him-well, only just a very, very small part of him. Instead, Rhys strikes a deal and Llawan must decide.

And then it ends. :( Basically, the blurb is the outline of the whole story.
Gah. I wanted more! It was cute and interesting and morbid! (So maybe not for everyone as the beginning will likely freak people off....)

There were some weird niggles, like (after he curls up) his 'stomach pressed against his spine' (I have trouble imagining that...?), and 'dashed' and 'jumped' used when it seems like maybe 'leapt' or even 'darted' would sound more appropriate, considering he's a mermaid and all. And a little odd with Llawan speaking in broken English but the rest of his thoughts perfectly formed.

But it was free, so I could overlook them all. Would have been 4 stars if not for the sudden ending, but it was enjoyable. :-D Just way too quick!
Tweet
2488 BOOKS